My wishes and dreams about a native Tibetan dog go as far back as the year 2000.

Let me reveal to you some of my “secrets”, since Gyan’s story is in some way also the story of the beginning of my Sems Kyi Bu travel.

Back in 1998 when I was about to decide to have a Tibetan terrier I kept reading on the Net all the information and looking at all the pictures I could get. At that time the information about the TT were very scarce. I saw most of the photographs of the TT, neatly arranged and displayed at the exhibitions … I was not able to make my mind because the dogs in the pictures looked too sugary, and I didn’t like them. They simply would not correspond to my way of living. However, it looks like they were destined to me, and one day when I was already loosing all hope, I found in an old encyclopedia of dogs a photograph of a shaggy TT, then the description of the first dogs from Tibet, and little after that a sentence Primož had written on the Net: “TT-s are dogs that even late in their life gladly accompany their master on his mountaineering tour.” My search seemed to be over, so I grabbed the phone and called. Yet I still had one secret wish: “It should be a white she-dog puppy!” I wanted to have a dog that would resemble Bunti as much as possible … That’s how I got Nanda.

…Along with her I started to learn and discover the wonderful “TT world”..

When Nanda was almost two years old, Primož and I started serious discussion about mating season and who should she mate with, and at that time Primož gave me two books by Angela Mulliner “The Tibetan Terrier”, that soon became my “bible”. I kept reading them and looked at the photos comparing one with the other. They opened up the world of TT-s, of which I had only the inkling. I began to understand and respect great work, performed for TT-s by Dr. Greig, and felt tremendous gratefulness and responsibility that came with it at the same time. I wished to carry on, and I had a good feeling that I ought to carry on with the work she had done, and finally I decided: “If I am to grapple with dog breeding it would be only in the direction of Lamleh and native dogs from Tibet.”

When Nanda was about to mate for the first time I said naively to Primož:

“It would be really great if we got a male from Tibet,”

and got the answer

“For the time being it’s just a wishful thinking because for almost 30 years nobody has brought a dog from Tibet.”

While on a tour in Tibet Primož (Rombon), Margareta (A-Mas), Ana (Serenissimo Ganesh), and Jack, in spring 2006 discovered Kanze which was almost like a divine experience.

So when Primož asked me if I agreed that Nanda would mate with Kanze, I thought it was a blessing for me.

In April 2007, when we were expecting Nanda’s and Kanze’s puppies, Primož, Jana and Ljiljana (Lhun-po) set out on their journey to Tibet again, this time also to get Sisi … I was just on the way to my job and my mind was wandering back and forth …I kept asking myself whether they had already reached the destination, and all of a sudden it flashed through my mind:

A moment after I had parked the car I sent him a SMS message:

”If you ever come across with another native TT male, it can stay with me.”

For a couple of days there was no answer … Then all of a sudden:

“Did you mean it seriously?”

“Of course I did,” I answered him.

He sent me a first picture of Gyantso by SMS. I was so overwhelmed I could have embraced the whole world.

I am sincerely glad we have internet and cellphone – I had been able for half a year to keep up with what was happening to Gyan in China, and was getting prepared for his arrival. I pictured myself the moment when I, for the first time, would lay my eyes on him and pat him, and when it happened, on November 13 th, 2007, I was totally overwhelmed…

The moment was just right and Gyntso was perfect…

Gyantso is a doggy that conquers your heart in a moment. His eyes are full of grace and understanding; people and also dogs are entranced by peace and tranquility he emanates. People simply feel inner peace and calm overflowing them.

However, this does not mean Gyan is a “sleepyhead” dog. Far from it! He can be a rather rollicking and playful guy who adores plushy toys and Tara. He attempts in many ways to let know the other three TT girls there’s no reason for them to be jealous about it, and invites them to play with him. Together with Tara they make a true “peace-making” team.

Boris, Tim and I are enchanted. Gyan is equally fond of all three of us, he belongs to all three of us and we all belong to him. Nobody expected him to be such a “pleasure-seeker”, who can barely wait to be cuddled and he likes to be scratched softly on the belly. He’s asking for human attention but in an unobtrusive way, and already being near humans means a great deal to him.

Even though he has been staying with us for only 14 days we have already passed the test of caring for his fur. Gyan is positively patient dog and stands very well bathing, hair drying and brushing his wonderful coat. Not a sign of any panic or revolt, everything is accomplished quickly and in a most effective way.

Of course there was some trouble with understanding of the Slovene and that’s why we tested if the “clicker” can speak Tibetan. The answer to this question: “Yes, it works!” In about 10 minutes after I had introduced “the clicker” to Gyantso he was quite ready to understand what I wanted from him, and he performed his first “sit down”, “lie down” and “come here” commands. What can I say – I screamed with joy!

Now and then I wonder where all his knowledge comes from considering the facts that he lived in the village of Garthar (the district of Kham) in Tibet, and a couple of months in Chengdu in China. In other words, he is in excellent command of the town, traffic, car, strangers, and he masters his reactions towards other dogs. Nothing new represents any problem to him or, if I put it differently, he is unbelievably adaptable.

Perhaps adaptability is one of the most distinct characteristic features of Tibet, Tibetan people and animals …
…To adapt means to survive… 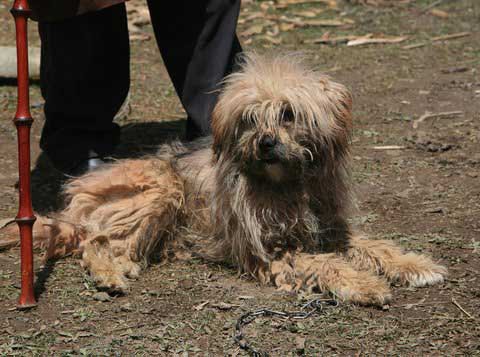 Today, Gyantso is a member of our family – together we’re writing a diary that in the future I shall be glad to share with the TT lovers.
Now I would like to thank everybody who in some or other way helped me to walk along the path I had dreamed about long time ago …

My special thanks go to Primož, Jana, Jack and Ljiljana, who fulfilled my wishes and found Gyantso.

Jack, thank you for taking care of him in China.

Once more, Primož … Well, I doubt whether I shall ever be able to thank you enough! Much of it will remain unsaid since my happiness is ineffable. To make a long story short – I am profoundly grateful for everything you did concerning the organization before and during the transportation, and above all, because you went there and got Gyantso for me.

Nanda, thank you for your entering my life and started this dream of mine …

While writing this story Gyantso is lying quietly right by me … It’s nearly impossible to describe my feelings.

Right now my heart and head are full of this thoughts: “One has got to desire something that develops into a dream, after that the passage of time is needed to bring forward the belief that some day it will happen … Then you let yourself go with the stream of life and make possible for the dream to become reality.